Jackson Hole, Wyoming is located right in the middle of one of the wildest places in the lower 48-states. Nearly every animal that existed here when European settlers first explored the west still lives here today.

What’s amazing about these animals is that they manage to thrive in a high elevation habitat with heavy snow and sub-zero temperatures.

Below is a countdown of Jackson Hole’s top four toughest, most amazing critters. Be sure to take a hike to check them out after a rafting trip with us! 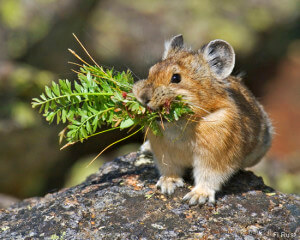 Number 4: Pikas—These members of the rabbit family hide out in high elevation rock fields. Not only are pikas some of the cutest creatures you’ll find in the Teton Range, they’re also some of the best at enduring cold temperatures. What pikas don’t like is heat. Sustained temperatures higher than 80 degrees can be deadly.

Number 3: Pronghorn—Clocking in at speeds of more than 55 miles per hour, these turbo-charged ungulates evolved to outrun a now-extinct North American cheetah. Each year the Grand Teton National Park pronghorn herd migrates roughly 100 miles to Sublette County and back over the rugged Gros Ventre Mountains. Recently, federal and state agencies joined forces to protect the Path of the Pronghorn from manmade disturbances that hinder that migration, such as housing developments and fences. 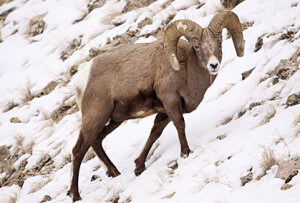 Number 2: Teton Range Bighorn Sheep—Scientists are constantly astounded that this isolated bighorn sheep herd continues to survive on the high elevation peaks of the Teton Range. In winter, they hang out on wind-scoured slopes and eat whatever they can find. Several agencies have set aside important winter range for the sheep to protect them for disturbance by backcountry travelers.

Number 1: Wolverines—These ultra-tough members of the weasel family have been known to kill bears and chew through logs. They can travel hundreds of miles in a single push and generally favor climbing straight over whatever mountains happen to block their path. Researchers say only few wolverines live in the Teton Range, where they give birth to their young in high elevation snow dens.