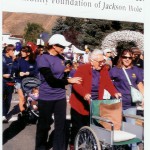 Leta Deveraux, otherwise known as Grandma Leta and Patty Ewing’s mother, participated in Old Bill’s Fun Run for Charities once again this fall. It was such a huge event, with record-breaking everything, that we couldn’t find Leta among the masses to snap a pic, but she was there and rearing to go! This photo is of Leta at Old Bill’s last fall 2010. There’s something about those Wyoming natives… Leta will be 104 on March 29 this year! Wow.

Trivia: Who is Old Bill?
“Old Bill is the spirit of community philanthropy. Everyone who participates in our community is Old Bill!” An event inspired by an anonymous couple known as Mr. and Mrs. Old Bill and put on by the Community Foundation of Jackson Hole, Old Bill’s Fun Run for Charities continues to raise awareness, support and funds (over 75 million in the last 15 years!) for non-profits throughout Jackson Hole. Thank you, Old Bill!