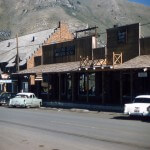 Thanks Mark Capwell for sharing this photo your grandfather took circa 1958! You’ll see the Sporting Goods Western Wear in the center – located where Barker-Ewing River Trips reservations office is now. The Wort is to the left, and Baggit to the right. So much has changed… and it’s only been 53 years!

The last official Barker-Ewing River Trips sighting of the First Family was in August 1996 when I had the honor of taking the Clinton family down the Snake River on a float. In total, there were 11 boats in the floatilla. For a while, I was pretty sure they had the wrong guide in mind when I was pulled aside and counseled on what to do if we were shot at… yikes, I thought! Isn’t that what the two “counter assault” rafts are for?

All in all, it turned into a beautiful afternoon with wonderful conversation in my boat and a huge education for me looking at the bigger picture. Mostly, it was a great honor that I was chosen to share what I consider to be one of the most special places on earth with Bill, Hillary & Chelsea Clinton!

I hope there will be another summer visit by the Clintons to Jackson Hole – and that they might consider joining me on another float trip along the now “Wild & Scenic” Snake River.

For old and new Jackson Hole rafting lovers, becoming a fan of ours on Facebook is one way to see new photos & videos, hear about specials and learn about all things river! Check it out at: The Barker-Ewing Facebook Page. We’d love for you to “like” us. If you have any photos, videos or comments, we invite you to post them! We’d love to see and hear about your experience with us!

“Barker-Ewing’s four-hour whitewater rafting expedition down the Snake River is beginner-friendly and travels through some of the deepest gorges in the river.” – FOOD&WINE

“Take on the Snake River in a raft-on request, the guides will do all the work so you don’t even have to paddle. Barker-Ewing River Trips can organize an outing that’s as relaxing or exciting as you want.” – Travel+Leisure

Although winter is not over, our blog hiatus is! A couple months of holiday r&r have left us inspired, energized and excited for the 2011 summer season. While Jackson Hole and the rest of the country continues to endure severe cold blasts, we bundle up with our cups of coffee and plan on how to make this summer a season of warm & fuzzy feelings!

A photo of a mature bald eagle seen on the South Park section of the Snake River, where our Teton Views scenic Jackson Hole river trips float, the place to be for bird watching in Jackson Hole. Click here to read more about our national emblem, the Bald Eagle. 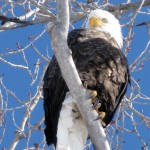